Six movie classics that would have been an entirely different story with Lasik eye surgery - Liberty Laser Eye Center
571-234-5678 info@libertylasereye.com

When it comes to stereotyping in movies, there is no better prop than a pair of eye glasses. With the addition of spectacles, the beautiful girl turns into the wallflower. The nerdiness or smarts of a character is underscored with a pair of thick-rimmed frames. Yes, it’s that easy.

Those of us still dependent on eyeglasses may find these clichés a bit annoying, but one point we can relate to is that without vision aids we are fairly helpless – just like our movie counterparts.

Here is a list of movie characters who should have considered Lasik eye surgery. It surely would have made a difference in their lives. And we can’t help but imagine how these movie storylines would have changed.

What if Pola in ‘How to marry a Millionaire’ could have seen the world clearly? 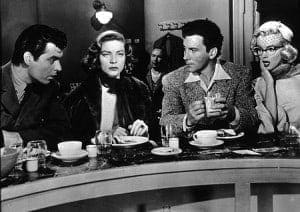 In ‘How to marry a Millionaire,’ Marilyn Monroe’s dizzy character Pola Debevoise is extremely nearsighted, but hates to wear her glasses. As she puts it, “Men aren’t attentive to girls who wear glasses” – a variation on Dorothy Parker’s “Men seldom make passes at girls who wear glasses.” She falls for a fake oil tycoon, not knowing he’s really a crook. When she takes a plane to meet him, she misreads Kansas City for Atlantic City on an airport sign and ends up on the wrong plane. She sits next to a man wearing glasses who encourages her to wear her glasses and who thinks she’s “quite a strudel.” He falls for Pola and they marry – turns out the guy has plenty of money too.

If Pola would have had Lasik eye surgery, she could have saved herself from a string of torturous dates with questionable characters. Perhaps she wouldn’t have ended up with a millionaire, but she may have seen the world in a whole new light, and rearranged her priorities in life.

Dennis Nedry in ‘Jurassic Park’ may have made it off the island, but would he have gotten far? 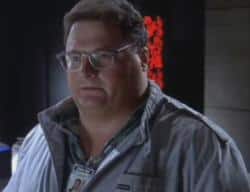 Fogged up glasses, lost in the mud and finally blinded and eaten by a dinosaur: Dennis Nedry was the obese computer-network engineer whose greedy actions set the stage for the dino madness of ‘Jurassic Park.’ Nedry was in charge of Jurassic Park’s computers. Another company offered Nedry $1.5 million to steal dinosaur embryos from Jurassic Park’s labs. In order to do this and make a swift escape, Nedry shuts down the park’s security systems, including the electric fences surrounding the dinosaur paddocks. Without power, the fences go out, and the creatures escape. After Nedry crashes his Jeep due to bad visibility and fogged up glasses while driving in a massive rain storm, he loses his glasses while struggling to get back on the road. Nedry ends up being blinded by a Dilophosaurus’s poisonous saliva and is viciously eaten alive.

While Lasik eye surgery likely wouldn’t have prevented Nedry from spinning up a mad scheme to steal dino embryos, he likely wouldn’t have met an untimely death and the dinosaurs wouldn’t have gotten loose. Instead, the story would have ended with Nedry being stopped on his way to his flight to the mainland, stuck indefinitely in airport holding, as we all know you can’t get a bottle of diet coke past airport security, so we can say with certainty that a can filled with dinosaur babies wouldn’t have made it very far.

Could Virgil Starkwell in ‘Take the Money and Run’ changed his ways? 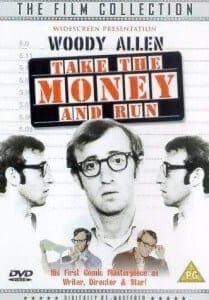 ‘Take the Money and Run’ is a mockumentary about Virgil Starkwell – who turned to crime to fit in with the guys who tormented him because he was the skinny, short kid with the glasses.
Woody Allen plays Virgil Starkwell, a music-loving nebbish who turns to a life of crime as a youngster and, undaunted by his utter failure to pull off a single successful heist. He continues his unbroken spree of bungled robberies and prison breaks even after he marries and starts a family. The film opens with a quick cinematic summary of Virgil’s childhood – this synopsis includes repeated instances of bullies taking Virgil’s glasses and stepping on them, a joke that runs throughout the entire movie. First it’s the bullies, then police, and later even a judge. Yup, poor Virgil never had a chance.

If only once Virgil would have taken the money and ran without some disaster landing him in the hands of authorities, he could have taken some of his loot and invested it into Lasik eye surgery early on. It could have changed his life. Enough said.

Without glasses Harry Potter may have ended up fighting Lord Voldemort solo! 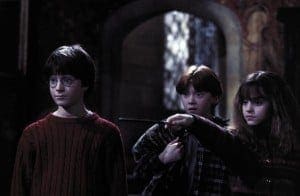 Many wizards and witches wear glasses, including the famous Harry Potter. It’s not to look smarter than the rest of us. Turns out that even with all that magic, you can’t fix near-sightedness, hyperopia or astigmatism in the same way Muggle laser surgery can.

Good thing magic can be used to repair glasses. Hermione, Ron and Harry may have never ended up as friends if they wouldn’t have bonded over Hermione fixing Harry’s glasses on the train to Hogwarts in the very first scene the friends shared. Hermione repaired Harry’s broken glasses with a flick of her wand. In the entirety of the series, the junior wizard broke his glasses at least seven times, usually putting Harry in some sort of predicament.

We know the glasses complete Harry’s signature look, but better eyesight surely would have made things a lot easier for him in his epic battle against Lord Voldemort. However, we are fairly certain that Ron and Harry would have been toast after the first installment of the series without their super smart sidekick had Hermione met a gaggle of lovely girlfriends in the next train car over instead of tinkering with Harry’s eye glasses.

Ralphie Parker in ‘The Christmas Story’ – Would he have shot his eye out? 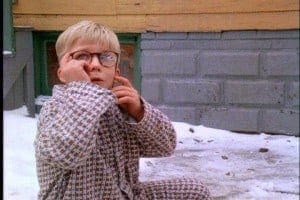 It should be said here that Lasik is not recommended for children, but you can’t talk about movies and glasses without mentioning Ralphie Parker. You may think that ‘The Christmas Story’ is a movie about family, Christmas time or even a child’s biggest Christmas wish, but no –  ‘The Christmas Story’ is a movie entirely dedicated to the eyesight of little Ralphie. After he is told over and over again that “He will shoot his eye out” with the Red Ryder Carbine Action 200-shot Range Model air rifle that he covets for Christmas, Ralphie finally gets the gun for Christmas and proceeds to take the gun outside, firing it at a target perched on a metal sign in the backyard. However, the BB ricochets back at Ralphie and knocks his glasses off. While searching for them, thinking he has indeed shot his eye out, Ralphie steps on his glasses and breaks them. Ralphie tells his mother that a falling icicle was responsible for the accident. His mother, not having seen what actually happened, believes him.

Had Ralphie had Lasik eye surgery, the movie would have lost one of its most beloved scenes. Perhaps his glasses saved him from actually shooting his eyes out. But let’s face it. This kid had it rough enough. By taking away the goggles,  Ralphie would have had it just a little bit easier in his young life that was dominated by a series of mishaps, bullies, his foul-mouthed dad, and let’s not forget that bunny costume.

The curse of the eye-sight challenged victim in scary movies: Mr. Burns in ‘The Mummy’ 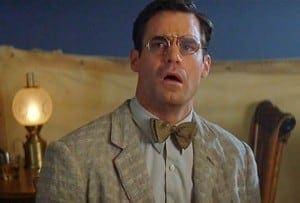 “My glasses! My glasses! Hey, could you help me find my …,” said Mr. Burns after losing his glasses, asking for help finding them – the problem was he asked an ancient mummy who is back for revenge and in the market for a pair of new eyeballs.

In ‘The Mummy’ Burns was an easygoing American adventurer on the hunt for ancient artifacts – always cheerful and optimistic. With the mummy’s resurrection, the ten plagues of Egypt arise. First up: the plague of locusts, which caused all of those on the hunt for treasure at the ancient ruins to run screaming from the site. Burns tripped and fell, knocking his spectacles off. As he blindly tries to reach for them, no-good Beni came running to escape and stepped on the glasses. Burns was rendered essentially blind but Beni left him behind. Burns looked around with his poor vision, trying to figure out where he was when he saw the fuzzy outline of a figure, but because his glasses were gone he couldn’t identify the creature. As he screamed in fear, the mummy gets a hold of him and claims his eyes. Yup, we saw this one coming.

Mr. Burns is representative of a number of vision-impaired characters in the scary movies. Just like the scantly-glad dressed teenager or know-it all camp counselor, characters with glasses rarely make it out alive in the horror genre. Lasik eye surgery would be an easy fix, but hindsight is always 20/20 – pun intended.

Now, haven’t you learned anything from those movie characters? Schedule your Lasik procedure today.
With Lasik eye surgery these movie classics could have been entirely different stories. Which other blockbusters come to mind for you?

Thanks for letting us know!
This is how we improve bertha
What did you expect to happen?